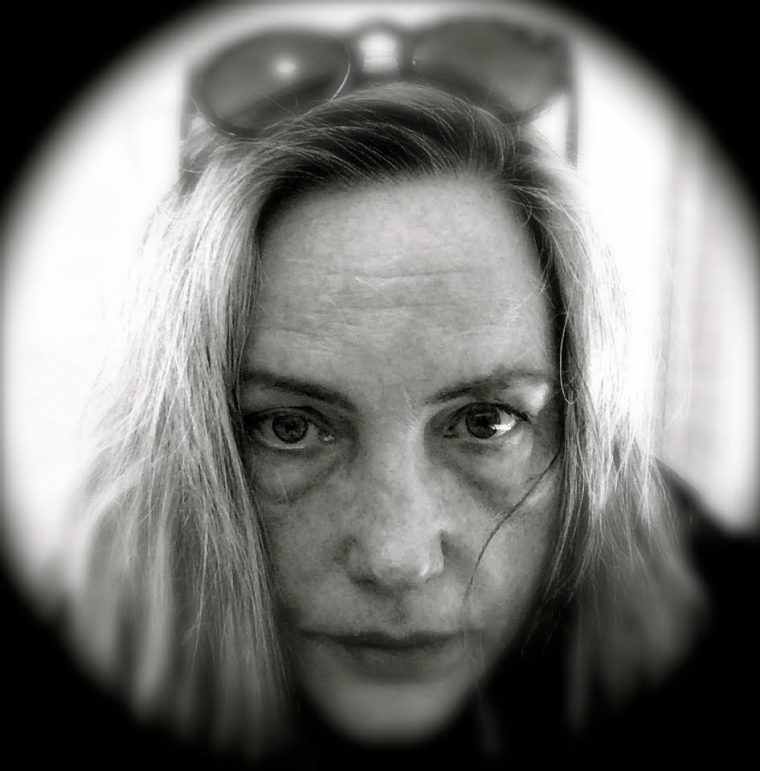 Rebecca Pyle is the featured artist of Volume 21. She is an oil painter and writer who has lived throughout the United States. Her artwork has been shown in publications such as the New England Review, the Hawai’i Review, Friends of the Great Salt Lake, and Sine Cera.

Tell me a little about yourself. When did you get your start as an artist?

I was raised in a dizzy, rich, succession of American states. Ever-changing blur of color and memories partially formed; places; West Coast and East Coast and the far North and the South too. And the middle West. (Now, in mountainous West.) I found out how illusory and hope-filled and temporary everything is. And how dreary most social compacts are, though I didn’t think of it in those words then.

To cope, I suppose, I burrowed into visual memory, visual definition? Or perhaps I’m just this way.

Besides oils, do you use any other medium?

As a painter I will use anything to paint. Oil paint, I prefer. Recently, someone offered me a large can of leftover house or porch paint. It’s old. “1964, Gray” is written on the lid, in careful small black handwriting. I accepted it, as a challenge. I have not used it yet. I think I may open it one day soon.

Is there any element of art which you enjoy working with most? Why?

The math of it, meaning how it all fits and works, across a canvas or whatever you are painting on, whatever space you are filling as a photograph. How each line or hundred lines or brushstrokes are somehow answering other marks or sets of marks. A painting or a mural is a contained thing yet not a containing thing.

Artists like making people wonder why. The titles are clues, or they can be the artist having fun with the sound of the words. Those are good too. I love expressionist titles like I Saw the Number Five in Gold or Mystery and Melancholy of a Street. I deplore the painting or artwork labelled Untitled. You’ve missed an important responsibility doing such a thing; it would be similar to naming your own child Unnamed. Though, that horror may be what that artist is after: that horror of anonymousness.

Quiet intensities of being an artist are very appealing to me. Artists have a terrific love of place: look at their studios, which are musical in arrangement. I love the being alone and the choosing, always, what to do; also, that wonderful moment of hoping a piece is done, saying part of what you wanted it to say. If it’s very good, it says more, which even you can’t figure out.

Of the artwork that appears in Volume 21 of JuxtaProse, which are you most proud of? Why?

I like a lot about an old pen and ink and watercolor drawing of mine, Ridden Away [paired with Brian Oliu’s essay]. Drawn while I was at university. I wanted to draw a carousel and wanted to escape that trapped feeling carousels can give you when you see them when you’re older. When you’re young, carousels as a ride look simultaneously safe and dangerous; they’re giving you a lesson about how we all ride the same circles, basically, through life, just like planets around the sun. You hang on. You just keep proudly going up and down all around the sun, which, in a carousel, is its magic mighty engine.

But the rider on this carousel on the racehorse is the soul of the artist: someone who rides, more dangerously, a horse different from other horses. It’s a horse that loves to run, that can leave behind the repetitions of other people, conventions. The artist, of course, likes to chart their own course, to outdo, symbolized by the well-outfitted jockey in tall boots on a once-trapped merry-go-round horse.

I’m fond of The Rose Establishment for Tea and Coffee, now with a poem by Rebecca Aronson. I painted it with a lot of ochre, a dull butterscotch gold, as if trying to amberize it, so it will never disappear. It’s where I often go to write and think (I am a writer, also). As a building, it looks a bit like a boat dock and building by a pier; when I look at the real building, I feel as if the water is missing.

And Santa Fe, Palace Street, with Megan Merchant’s poem: such a dusty, hazy, dizzy chalk and pastel drawing, sketched quickly sitting on a dusty curb one summer in Santa Fe. I’ve visited Santa Fe a dozen times, staying days or weeks. I like this chalk/pastel because it takes the puzzle of Santa Fe and doesn’t solve it; it gives up. As it should.

I read your interview with the Roanoke Review and was intrigued by what you said about self-expression and rescue. How has your visual art “rescued” you?

I think I mentioned that writing can be a rescue for many writers, who tend, in many ways, to be emotionally numb: writing’s often how they can locate their emotions, project them, take flight with them. Artwork, I think, is similar, but allowing more announcements of summation: the glass mountain you want to climb, the view from the mountaintop. And what you find beyond the mountain.

Thomas Merton once said, “Art enables us to find ourselves and lose ourselves at the same time.” What did you discover about yourself when you painted House at the End of Douglas Street, the cover art for Volume 21? What did you lose?

I love that quote. Opposites. Like the mystery of an artist’s burgeoning, overweight ego and sometimes their almost complete and necessary lack of ego.

Art is wondering. Sometimes the wondering is in the title.

Once, a little boy in grade school, in the second or third grade, in the third or fourth state I’d lived in thus far, handed me, on the sidewalk outside of the school, a beautiful small quilt. Apparently he’d secretly fallen in love with me—what else?—and told his mother, and she made me a small quilt in my honor with Becky embroidered in cursive with red embroidery thread in one corner. I don’t know if I knew how to write in cursive yet. If I did, I hadn’t done it much; that cursive Becky looked wildly, casually sophisticated. A cursive “y” with underswirl like one upwinging bee’s wing, my name on that handmade quilt, at an angle, flying up.

His name was Douglas.

I don’t have the quilt, as a real thing, anymore. But it’s in my head: in this house, with its arched red door, maybe, at the end of Douglas Street. He and his mother the gifting seamstress must live there, he still small and adoring, with love just as hopeful and clear and true, for me.

So: I’ve lost little Douglas; I’ve lost the memory of his last name and even a memory of his face. But this painting is saying I haven’t forgotten his gift. Maybe we share that little house together, forever, in some part of my mind.

What do you think the future has in store for your artwork? Are you currently working on any art projects?

It’s all about how many blank canvases you have right now. I have a lot, but they’re too small. I need to go get large ones. A big blank canvas will stare you down, say do something.

I do have that big old neat can of gray house paint labeled 1964, so neatly tapped shut with a rubber mallet. It might even be ready to use, perhaps as an underlayer for oil paints. They would be the 1964 series, puzzling everyone who looked at them.

All an art project takes is a lot of concentration. And a lot of distraction. Kind of like the Thomas Merton quote about finding yourself and losing yourself. Some people thrive working with others in a studio; I thrive alone.

Maybe that Merton quote means, in the act of art, keeping the best and fiercest part of yourself, throwing away what’s intruding or unnecessary, illusions about yourself or other people. That’s the artist’s way—proving things to yourself first, to other people later.

I’m having an urge to do something very black and white, adding color later, but that may be because of black and white woodcut prints I’d just seen in a gallery. I want to open the can of gray 1964 paint. I want most of all to indulge myself by doing whatever I need to do. Art’s duty; also, a delicious true selfishness.

Thank you for displaying paintings of mine in JuxtaProse, allowing me to feel sometimes the real names of my paintings are “I Imagine Myself Grateful,” “Embouchre,” and “I Am Thinking about Flowers.” Or “Ragamuffin,” “The Clearing Off Penn’s Creek,” or “Vanishing Twin.” All the rest. You don’t know how much joy it brings, seeing my paintings with these written pieces.

Taylor Gianfrancisco is currently attending Stetson University for her Master of Fine Arts in Poetry. She has had poems published in Vamp Cat, Bone & Ink, and Royal Rose. She has worked at literary magazines for the past two years. She lives in Orlando, Florida.

JuxtaProse is an online literary journal that publishes fiction, nonfiction, and poetry from around the world.